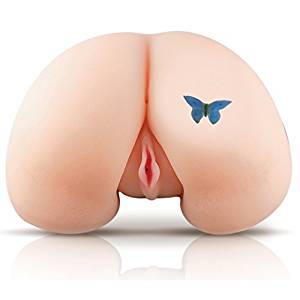 The Blush Novelties X5 Rear Ecstasy, which from here on out I am just going to refer to as the Rear Ecstasy, arrived in a box that is not in the least bit discreet. You can see it pictured above. The toy is on full display and there is a scantily clad lady on the front. This is not the sort of packaging that you're going to want to leave lying around. There is one aspect of the packaging that I love though. There is a little window in the corner labeled “Feel Me Try Me”. You can poke your finger through a hole and in that hole is a little tiny version of the toy, so that you can can feel what the material is like. While this is nice of them to do, I just love the little tiny version of the toy.

The Rear Ecstasy is made from Blush Novelties' “X5 material”. It's TPR and Phthalate and Latex Free. Since TPR is porous, you aren't going to want to use it with any non-fluid bonded partners. I will say that the material does feel nice. It's soft, retains heat well and feels fairly realistic. The Rear Ecstasy does have both a vagina and butt entry, but this is rather misleading. Both entries lead to the same inner canal so they feel exactly the same. The bum hole seems a bit oddly placed to me as well, it's a bit too high. The interior of the canal is ribbed also. This ribbing though is very, very minor and is so subtle that you barely even notice it while you're using the toy.

I was actually somewhat surprised by the size of the Rear Ecstasy. I was expecting it to be a bit bigger. I am not sure of a subtle way of saying this, but due to the small size, it makes me a feel a bit dirty and gross. It looks fairly lifelike and the proportions aren't of those of an adult, if you catch my drift. I was also expecting the Rear Ecstasy to be a bit thicker. It's only about 3.5″ tall. To make matters worse, I was expecting the entire thing to be solid, but there are actually large air cavities in both butt cheek areas. These voids make the toy feel less substantial and a bit cheap. I realize that they do this to save money and keep the weight down, but I don't think it's worth the sacrifice. Speaking of weight, this isn't a light toy. The Rear Ecstasy weighs nearly six pounds. The weight really isn't an issue though, as this isn't a toy that you're going to manipulate with your hands while using. It's going to be stationary and you're going to be the one moving. That said, this is still a rather substantially sized toy and storing something like this can be rather problematic, especially if you need to hide it.

I also want to mention that what I believe to be wooden beads don't seem to have any sort of coating or anything on them. This means that they are most likely porous and will absorb any bodily fluids they come in contact with, including bacteria and viruses these fluids may contain.

So, how well does it function as a toy? Not very. The problems started right away for me the first time I used it. I decided to use the vagina opening first and getting myself into the opening is quite literally a challenge. The entry hole is very small and there are lips surrounding it. The toy is also very squishy and soft. Every time I tried to put myself inside of it, the lips would cover up the hole and the entire toy would just sort of collapse down on itself, effectively sealing the entrance shut. I would say it took me a good 3-5 minutes just trying to get inside of the stupid thing the first time that I used it. I have found a method that does work fairly well, but it's still not ideal. You pretty much have to reach down and spread the lips open with your finger and then guide yourself in. Even doing it that way you still may have trouble sliding in. I also don't like this method because I don't really want my hand covered in lube, if I can avoid it. At least you can use both water-based and silicone-based lubricants with the Rear Ecstasy.

It's a good thing that the entrance hole is small though because that is what is going to supply the bulk of the stimulation. I found the texture of the inner canal to be extremely lacking, so much so that it's barely even noticeable. The whole experience is very blah and not really worth the effort. I can bring myself to an orgasm with it, but it takes some work. I was also highly disappointed that the butt entrance just leads to the same canal as the vagina. I was really hoping that it would have two different sensations, so in a sense it would be two toys in one, but it doesn't. In fact, when you are inside of the vaginal opening you can even see your penis through the butt entrance. The butt entrance is a lot easier to get inside of, but I still feel like the butt hole is oddly placed.

Cleaning of the toy is fairly easy. Just flush it with some water and a mild soap or wipe with your favorite toy cleaner. I found the biggest problem was drying the thing. Blush Novelties says to just let the Rear Ecstasy air dry. This works, but it takes a long time. I found it best to help speed up the process by sliding a towel through inner canal a bit. After cleaning and drying, you can apply a light coat of cornstarch to keep the material feeling fresh.


As I mentioned at the start of this review, I have always been curious about this style of sex toy for men. I can see how they have potential to be very good. If this toy is indicative of the genre though, I think this may be the only one I will bother to try. I found this toy difficult to use, and when I was able to use it, I found the experience very boring. While it's a generously sized toy, I still found it a bit small. The size was slightly disturbing and I think it would be a better experience if the toy felt more substantial. Due to the large size and my lack of enthusiasm about it, I am going to do something with this toy that I have never done before. Once this review is published and I answer any questions that may come up, I am going to throw it away.