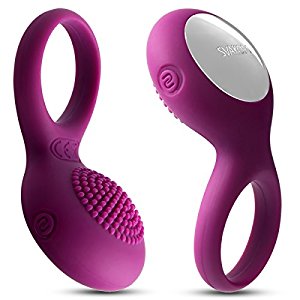 Man oh man, have you seen how many vibrating ring designs are out there? If so, you might be a little intimidated by the variety of shapes and sizes available, and wondering which one works best. Well as with most things sexual, it all comes down to personal preference, but hopefully this will help.

These are often best for women who have sensitive clits, since they don’t usually provide overly intense stimulation directly on her clitoris. Sometimes they have little nubs on them that are supposed to do something for the woman, but in our experience you can’t feel those much unless they’re really pronounced.

By Protruding rings we mean the ones that have a seriously raised something on top, be it a tickler, a knob, or an abstract animal head.

Most protruding rings are designed in a way that will give some direct clitoral stimulation to her, at least from some part of that raised something. These are usually your best bet for women who like a lot of pressure on her clit too, because they give her something to grind against.

Now if you think about the mechanics of sex, you’ve probably realized that neither Flat rings nor Protruding rings maintain contact with a woman’s clit at all times unless you’re using more of a shallow bump-and-grind style of lovemaking. During any kind of serious thrusting, they tend to buzz her on thrust and pull away during the withdrawal, which can be either tantalizing or frustrating, depending on her needs. To find a cock ring that is more apt to stay in contact with her at all times (or at least more than the others) when thrusting, you’ll want to look at the Vertical rings.

Vertical rings tend to slide up and down between her labia so direct clit stimulation is easier and more continuous. However, if you plan to do any jungle-animal type rough thrusting you have to be careful with these. It’s possible for them to shift and poke her in an unpleasant way if you get to wild with them.

Now you might see a few rings out there that have other configurations or doo-dads on them, but knowing what you now know, you should be able to figure out their uses pretty easily.

<<< What is the Best Male Masturbator?
Choosing a Vibrating Cock Ring: Which Material >>>