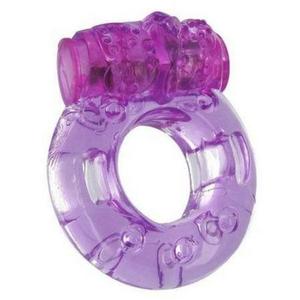 To vibrate or not to vibrate, that is not the question. The question here is, which is better; wireless or wired vibrating rings? Well, the answer is not so simple since they both have their pros and cons, but this bit of info might help you decide which one is best for you.

Of the two, the wired vibrating rings last much longer on a single set of batteries… 2 to 4 times longer, in our experience, and provide stronger vibrations than their wireless competitors. However, that added power sometimes means you’ll have to tolerate a bit more noise from the toy.

Wireless rings are controlled by a push button on the end of the vibrator unit vs. the obvious hand-held controller the wireless ones offer, which may be a pro or con depending on how you look at it. Some couples are happy with choosing one vibration level, and don’t want or need to have a tangle of wire and a control pack sliding around on the bed, while others like to switch a toy’s vibrations up during sex and enjoy not having to reach between them to do so. Beware that some wireless vibrating rings only *have* one vibration level anyway, while pretty much all wired ones offer multiple speeds.

One of the biggest factors in deciding between the two may be the care and storage of the rings. Most wireless rings can be cleaned under running water (with soap of course) and are small enough to store almost anywhere and/or travel with easily. Some are so small that you could even hide them in a vitamin bottle if discretion is a must. On the other hand, wired cock rings will obviously take up more storage space and may not be so easy to conceal or travel with. Their vibrating ends are sometimes watertight enough to wash under running water, but the controllers rarely are so they have to be cleaned separately with a cloth or cleaning wipe.

As far as longevity goes, there’s really no big difference between the two. The durability of the ring itself depends a lot on the material either way, and the quality of the mechanical bits vary. We’ve had wired rings conk out after a single use, whether it be from an electrical short or a wire coming loose, and wireless ones that just quit for whatever reason after the first set of batteries is done. By the same token, we’ve had both wireless and wired vibrating rings last for well over a year, so it’s going to depend on the overall quality of the toy, not whether it has a wired controller or not.

So there you have it, the basic ins and outs of your vibrating cock ring choices, and we hope that it helps you decide.

<<< Choosing a Vibrating Cock Ring: Which Material?
How to Clean Silicone Penis Masturbators? >>>