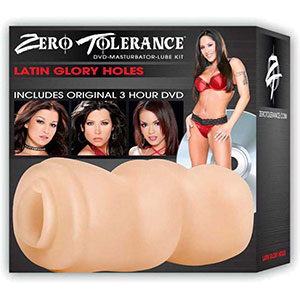 I'm going to do things Bass Ackwards and start by telling you about the packaging. It's a CD-sized cardboard box, around 3" thick, and about as discreet as a party stripper standing on the dinner table. There's a posse of topless girls on the front, 3 lingerie clad ladies on each side, and a cluster of very explicit scenes from the DVD on the back. For those of you who don't have a lot of privacy when it comes to your mail or your rooms, you have been warned.

The male masturbator sleeve is 4-1/2" long and made of latex free synthetic rubber, aka TPR, that's neither sticky nor stinky. Both are plusses in the sex toy world. I'd describe it as feeling semi-realistic, and it stretches enough to be comfortable for a slightly larger than average man to use once inside. Getting inside was a 2-handed operation though, due to the miniscule opening, but once that was managed the toy wasn't ridiculously tight. I probably don't need to mention the need for lube here, and this toy is compatible with both the water based and silicone varieties.

The sleeve's inner texture is varied; first you encounter thin ribbing, then bumps, then more thin ribbing, all of which are felt very subtly so it just blends into one overall sensation. The sleeve also changes from looser to tighter more than once, and for me that's where the main stimulation came from. It all feels great combined.

Another thing I like is when you squeeze the toy it just creates pressure rather than being able to distinctly feel you or your partner's fingers. What I don't like is that the toy is so short a fair bit of my dick pokes through the hole in the opposite end. That's something I've never enjoyed much in a sleeve, though we've met others who do. I'm also not fond of the presumed durability of the sleeve. In the picture above you can see there was already a small split at the opening when we got it, and more have developed in the few times we've used it. For that reason I'm going to say that you might not want to risk turning this toy inside out to wash it. It's easy to clean without doing that at any rate; soapy fingers and a water rinse go right through it.

The DVD, in my opinion, is worth the price of the kit by itself. It has 10 different scenes of 11 different Latin women performing from what is meant to be your point of view. Meaning, they're talking directly toward the camera, making simulated eye contact with you while they slip out of their lingerie, kneeling in front of you, that sort of thing. There isn't any music, and the settings are clearly lit everywhere from a private poolside to different rooms of a house so it's easy to get into the fantasy. No two scenes are exactly alike, and “you're” getting everything from an 11-minute dirty talking titfuck to a 35 minute play session that starts with a sexy strip tease through a glass door and ends with sex in multiple positions. There is even one clip where two ladies team up to give a 15-minute blow job… all from your point of view. I'm no porn virgin but this is the first time I'd seen something like this, and I enjoyed it quite a bit. The ladies are all very attractive and a few are nearly as creative as my own is, particularly the lady who uses her feet during oral.

Overall I think this kit is an outstanding deal for under $20 and wouldn't hesitate to recommend it to someone else. On a side note I would like to see them release a line of larger sleeves identical to this that were a bit more durable too. They would be contenders for the position of producing the best male masturbator sleeves if they did.

I think it's a really good set for a man playing solo, but not so much for a couple to play with together. Even if you're a woman who likes women, the DVD's thrill might be limited by the fact that there's usually a dick in the picture, and the girls are *really* playing it up to tease a man. You know what I mean, there's a lot of that cutesy over acting that makes most of women want to roll their eyes. I will say that they're all pretty and they're wearing some adorable lingerie on there!

I like the sleeve a lot. When we first opened the package I thought it would be sticky because there was this odd film on the plastic.

Anyhow, it was a case of looks being deceiving. There was nothing on the toy, and the material is really soft and smooth. My boyfriend says it's like “fresh shaven poontang” and I guess that's a pretty accurate description. It did take a pinch-and-stretch maneuver to get him started in that mini hole (pinching on the toy, not his dick), but after that it was uber easy to use with one hand. The wavy shape on the outside helps a lot.