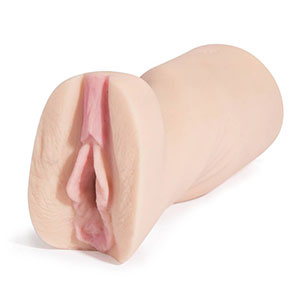 As we’ve mentioned before, male masturbator sleeves are not only for solo use, but are a great way for couples to add a little variety to hand jobs. Thus my girlfriend and I are always up for reviewing new ones.

The Manhandler is made of a non-toxic material called Cyberskin, by Topco, in a nice translucent emerald green color. It feels a lot like a gummy bear candy, with lots of squish and a little stickiness to the surface. It’s about 6" long with a contoured shape to help you hold on to it. The inner tunnel is heavily ribbed, and there’s a small opening at the far end that helps with cleaning and keeps suction at a minimum.

The Manhandler had a strong chemical scent right out of the package, but we weren’t all that put off at first since we’ve had toys smell like that before that just needed a little airing out to improve. However, we had real trouble with it shortly afterward. We’re in the habit of washing every toy before use, and Manhandler started to deform just with a soap/water wash. We used warm (not hot) water and Dial liquid soap, which Topco has told us before was ok to use with their Cyberskin. But Manhandler not only sustained a good sized dent where it was resting against the sink stopper during rinsing (which is rounded metal), it also lost most of its sheen. Later we noticed that it adopted tiny indentions from the cotton towel I had laid it on to dry.

We’ve had this toy for over a week now and there’s no improvement to any of that, so I think it’s safe to say it’s all permanent. Additionally, it’s now stickier than usual, and it leaves a strong plastic/rubber scent on our hands when we handle it. In short, it acts like cheap jelly.

Still, it’s our job to give every toy we get a fair shake and let our readers know how they worked, so we did go ahead and try it. Even with a condom on the Manhandler is pretty intense inside. The chamber narrows the farther in you thrust, and when you combine that with the ridges there’s a lot of sensation going on. It might even be too intense for some, and I don’t think I’d recommend it as a first sleeve. It got me off fast, and I actually had to ask my gf to stop moving it right when I was ready to cum because it was too much at that point.

When we were done I only rinsed the toy clean (no soap) and didn’t notice any new disfiguring of it, so maybe it isn’t made to tolerate any soaps. If that’s the case though, the manufacturer should have stated that somewhere on the packaging.

Though it’s sold at an affordable price and has an appealing look, overall the Manhandler just wasn’t for me. If they toned down the ridges a bit and improved the material a LOT, then maybe.

I really had high hopes for this male masturbator. I loved the color, the easy-to-hold shape, and the fact that I could see through it, but I hated the material. It’s hard to like a toy that deforms so easily and leaves a smell that stays on your hands for hours after you wash them. We’ve had Cyberskin toys before (the type that looks like real skin) and never had one act like this.

Amongst other things, I just don’t get the impression that this sleeve will last very long, particularly if you like to use something more than water to clean your toys. You might be better off buying a handful of Tenga eggs for pleasing your man, which *can* be used more than once even though they’re marketed as “disposable”.