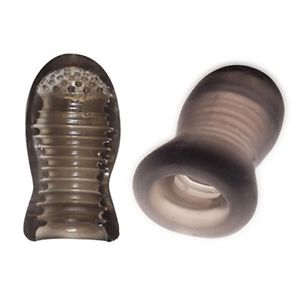 Being a man who is spoiled by a large collection of Fleshlights, Tenga Flipholes, and the best of the Toys Heart penis masturbator sleeves, I didn't expect much from the new Ona Pit Pleats. It certainly doesn't look like much; just a 3.75" flat rubbery mitten minus the thumb. I was pleasantly surprised though.

It's made of a smoky-clear synthetic rubber (TPE) which is both phthalates and latex-free, and this particular TPE has no odor. On a scale of 1–10, its firmness is about a 6, so it's fairly squishy but firm enough to keep its shape and let you distinctly feel the textures inside during use. It's not really sticky so to say, but like all TPE it does create a good amount of drag against the skin so it's NOT comfortable to use it without lubricant. The good news is, it takes very little lube to make things good: just a finger buttering on the inside or a slick dick to start with, and it feels fine. Oh, and I didn't mean “butter” literally; use a water-based lube.

The opening is about 1" across and the TPE stretches enough to fit a slightly larger-than-average penis, but if you're packing more than 7" or so in length you might want to go easy on this one. The material seems pretty durable, but it thins out enough to take on a colored see-through quality on the closed end if you push too deep. We haven't managed to break ours yet, but fair warning there.

Unlike the glossy inside, the outside of the Ona Pit has a matte finish which does “grab” more and makes it very easy to hold onto. It will pick up lint easily, so no hiding it in your pocket without a wrapper, but we didn't have any issues with it pulling the short hairs.

As for the inner texture, there are thinly-spaced ribs along the walls and a pebbled texture in the end, both of which can be felt easily during use. For me it was most intense on the head, and I found that having my girlfriend use a slower motion with it on me felt best. If she went too fast those nice enjoyable side ribs made more friction than I like, but a slower speed felt great and made me notice the slight sucking sensation that it has too. Obviously since it's a soft sleeve you can squeeze to get different tightness levels too, so it's something you can experiment with to figure out what feels best.

Cleaning it afterward is no problem either. I give it a quick rinse through the hole to get most of the mess out, flip it inside out and wash it with soap and water, then lay it out to dry. The ribs and nubs squish down enough that they don't create any areas that could hold anything nasty.

There is only one real downside that we found with this toy, which wasn't a big issue for us but might be for others: the packaging. It's a soft plastic wrapper that reminds me of one of those single serving tuna packs that you tear to open. In other words, you can't use it to store the toy in later. We just use a sandwich bag for ours, but anyone who likes boxes will be disappointed. You're also not going to get much useful information off of said wrapper unless you can read Japanese, the same as the sample tube of “Vanessa & Co. Shape up Lotion” that comes with it. I'm assuming that's some sort of enhancing lube, but since those words are the only thing I could read it's not going anywhere near my dick. Sorry folks.

Useless packaging aside though, this is a nice sleeve to have in your collection. It's small enough to take anywhere, easy to clean, and it isn't a lube hog. We have no idea how much they plan to sell these things for, I think it's something that a lot of men will enjoy.

We have several male masturbators that I like because of how easy they are for me to use on him, but this one totally takes the cake. It weighs next to nothing and fits in my hand so well it's pretty much effortless to use because I don't have to hold it any certain way. If it pops off, all I have to do is squeeze the short sides a little (it reverts back to flatness as soon as it's off) and it opens right up so I can slip it back on him. And while normally I'll make a statement about how you need to be careful not to get lube on your hands or you'll lose your grip, it's pointless this time because nothing *gets* on your hands. Something about the inner texture keeps the lube and everything else inside, even after he's done his thing. I know because I left it on him one time while I went to get a washcloth just to see if it would leak.