Blush Novelties All In Stroker

Home > Other Male Masturbators > All In Stroker

What Is The Blush Novelties All In? 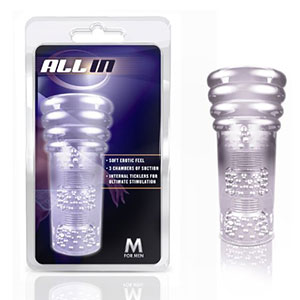 A stroker for those with penises. It’s designed to simulate oral sex, as are so many others. It also happens to be clear, which is pretty damn amazing. Being able to see myself inside the toy is awesome, and while there are others out there that are clear, the All In was only my second to try.

What Is All In Made Of?

“X5”, a material that feels softer and stretchier than the jiggliest TPR toy I have, and as I couldn’t find a concrete answer as to what it is.. We’ll grade it as such. I can tell you that it’s a porous material and as such shouldn’t be shared with any partners you aren’t fluid bonded with. No, not even with a condom because it’s likely the condom or the male masturbator will fall apart. Just don’t do it!

What “Features” Does The All In Have?

Other than being made of “X5”, it’s also got little ribbed rings in the tunnel, as well as little soft nubbly areas, I was pretty skeptical of them even being felt, but they were. More about that in the experience section.

Caring For The Blush Novelties All In:

Cleaning The All In Stroker

You’ll want to stick to just hot water and gentle soap. Some toy cleaners are probably okay, but I can’t vouch for any of them without knowing exactly what the All In is made of. You’ll want to let it dry well also. towel the outside of mine off and then lay it opening first in front of a fan.

Lubing The All In Stroker

Stick to water based lubes, please. I love my silicone and oil based lubes as much as the next person, but with a material that I’m not certain what it is… Just play it safe.

Storing The All In

Just keep it somewhere cool and dry, and preferably not touching other toys. Broken record blah blah material unknown could react blah blah. Seriously. It could melt all over your toys. Store it in a plastic bag just to be sure it won’t ruin your other pleasure investments.

My Experience With The Blush Novelties All In:

It’s just right to fit most penises and the “far” end is open so the longer guys will even be popping in and out.

Now… It’s not the best male masturbator I’ve ever used. It wouldn’t even really rank in my top 5, but it is nice. The little ribs and nubbly bumps are definitely felt, and the softness of the X5 material mimics flesh reasonably well.

I edged for a looong while with the All In and surprisingly the lube stayed slick the entire time (about an hour) until I finally couldn’t hold back. Those little bumps and ridges are pretty perfect on cock head.

Turns out I really should have snapped pics first though, as I tore the “mouth” of the All In that night, so all pictures for the review are after I tore it:

Didn’t realize I tore it until picture time.

Overall Opinion Of Blush Novelties All In

I LOVE THE ALL IN. I DO WISH IT WERE MORE DURABLE, BUT THEN IT WOULDN'T FEEL QUITE AS NICE.

Overall, I was very pleased with the All In by Blush Novelties. It felt very good, and it’s cheaper than a Fleshlight toy. I’m bothered that it tore after one night, because I’m not just a super hung man. With that in mind, I was pretty vigorous with it.