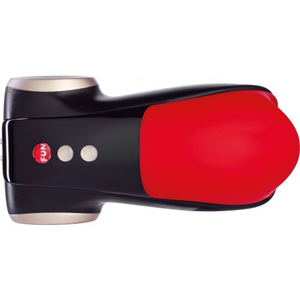 The Cobra Libre went instantly onto our wishlist as soon as we saw it advertised as we’d never seen any male sex toy like it. This sex toy hasn’t failed to impress us giving mind blowing orgasms and is currently our number 1 male sex toy of all time.

The design of the Cobra Libre is like no other male sex toywe have seen it is very modern, sleek and if a product can be classed as sexy then this toy would be in that category. The sleeve is not very deep as this toy isn’t designed to stimulate the entire penis like many toys instead it concentrates on the head.

At the back of the Cobra Libre there’s raised Fun Factory Logo which is actually the charging area of the toy. The toy has a magnetic charging method which is becoming more popular recently. At the top of the the toy is where you control the vibrations of the toy with 3 touch activated buttons, one turns the male masturbator on and off (holding for 2 seconds) and the other 2 are for changing the strength and pulsations.

To change the strength of the vibrations or to change patterns you press the touch activated buttons, one is to increase the strength or change patterns and the other is to decrease the speed or to go to the previously used pattern. We have tried to count the amount of speeds and patterns on the toy for this review but as there are so many, some cannot be distinguished from one to the other and the hit/miss of the touch activated buttons we have failed to count them but lets just say there’s many.

A nice feature of this toy we found is the reset/pause functionality by pressing the on/off button (not for too long as it will turn off) it will go back to the original speed when you first turned it on. This is great for when you get on the edge of climax but don’t want to orgasm as yet, perfect for training yourself to last longer we feel.

The touch activated buttons arn’t really user friendly, they are sensitive and if you’ve got lube on your hands which is common in these situations controlling the masturbator becomes hit and miss but still doesn’t stop this toy being a favourite of ours.

The packaging of the Cobra Libre follows the concept car feel of the toy as the box has a expensive toy race car feel about it. It’s very well designed and the toy fits nicely inside and is packaged well enough not to get damaged during transit.

Surprisingly this masturbator doesn’t include the charger needed as standard to actually use the toy. This is quite bizarre as you have to buy Fun Factory FunClick ‘N’ Charge Magnetic Charger separately unless you have one already with another compatible Fun Factory toy. Luckily we purchased the toy via Lovehoney which currently they send you a free charger with every purchase.

Fun Factory states that charging can take up to 12 hours and we have seen reports of it taking upto 24 hours for the initial charge. Luckily it only took 6 hours to fully charge our Libre with subsequent charges after that around 2 hours depending on the depletion of the battery inside. After reading a number of reviews the amount of time to initially charge can vary greatly.

The toy is very easy to take care of due to the main part of the toy being silicone. As always do not use silicone based lubricants with this toy as silicone toys and silicone lube do not mix and they will degrade your toy to a sticky mess.

Cleaning is very easy especially compared to a Fleshlight due to it’s short instertable length. We found it’s best to use warm soapy water to clean. You also don’t have to worry about getting the plastic part of the toy wet as the toy is splash-proof. It’s not as easy to clean as the Tenga Flip hole but it’s still very easy for a male sex toy.

The orgasms we have had from using the Cobra Librehave been some of the most intense we have ever had by using a sex toy with only the Tenga Flip Hole being a close comparison. In fact the Tenga Flip Hole has now become our 2nd favourite for big orgasms due to this toy.

The touch activated buttons make controlling the toy are very hit and miss but we have found once we have found a setting we like we stick to it until orgasm. We would have prefered a simpler tried and tested method to this one however.

The patterns of the this toy are amazing and varied and it really shines because of this. As there are 2 motors inside it felt that the toy was actually rotating around the head of the penis pleasing every part of it as the vibrations felt as they were coming from every angle. Is very hard to describe how it felt and it feels nothing like any other toy we have tried in the past.

Based on our Cobra Libre review we would highly recommend this sex toy even though the control panel is a pain.