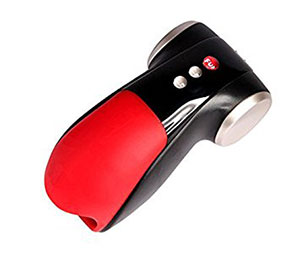 The Cobra Libre 2 by Fun Factory? I’ve been interested in trying a Cobra Libre out since I first heard of them, but hadn’t had luck finding one to review.

What Is The Fun Factory Cobra Libre 2?

I love the look of the Cobra Libre II

It’s a stroke free penile masturbatory aid. I almost said hands free, but those buttons would certainly be magic if it were indeed hands free. I say stroke free because it’s supposed to be able to get a penis to climax without having to do all the stroke-y stroke-y we’ve grown used to.

What Is Cobra Libre II Made Of?

The parts that your fleshy bits will touch are made of:
- Metal
- Silicone
- ABS Plastic

From a safety for your body/peace of mind stance, the Cobra Libre II is a prettily produced product for plenty of penile pleasures.

How Big Is The Cobra Libre II?

Well.. It’s moderately sized. Actual dimensions are 5.8 inches long and 2.8 EXTERNAL diameter. The “mouth” of the CL2 is a bit smaller.

You can use a 10% bleach solution, hot water and soap, or toy cleaner. While all the external parts would be fine in the dishwasher, the heat could cause issues with the internal parts… Play it safe!

Any water based or oil based lube will work fine, just pay attention to your own needs. If you are allergic to certain water based ingredients (glycerin or parabens, for example), find one that is safe for you. Some silicone lubes may be alright with the Cobra Libre II, you’ll want to spot test.

Fun Factory’s chargers rock, as there isn’t a certain way they have to be plugged up… You plug one end of the charger (it’s a USB charger) into any available USB port and then get the other end near the charging contacts and you are in business! Little magnets pull the toy and the charger together, and then the light lets you know what’s up as far as charging goes:

Cobra Libre II Patterns/Features:
As far as features go:
Easy to use with one hand
Rechargeable
100 % waterproof
Easy to clean under running water

I suck at describing patterns. So, we’ll just go with chart pulled from the PDF User’s Manual:

There are 2 training modes, a basic vibration, 2 faster vibrations, 3 “slalom modes” (ramp up then rapid drop), and then the “rock and roll modes” which are mash-ups of patterns. My personal favorite is the middle of the Rock N’ Roll patterns. The training patterns are… Well, they are boring as hell. The other patterns? Decent, but meh.

My Experience With The Fun Factory Cobra Libre II:

To be 100% clear here, to this point I’ve been pretty disappointed with all of the Fun Factory toys I’ve tried. The Stronic Zwei? In theory, a great toy. Lorax of Sex LOVES it. I didn’t. It just fell short. The Fun Factory Duke, a sex toy designed to hit the prostate? It felt like a semi-lifeless finger in my butthole, and it was more of an annoyance than a pleasure to use.

My first use, I hated it. I didn’t like the way the mouth crowded the head of my cock:

That “lump” crowds the cock head, and also transmits the bulk of the vibrations into the frenulum.

I didn’t like the way the vibrations felt, and it just didn’t feel as good as the Pulse by Hot Octopus. I set the Libre II aside and waited a few days, and tried again. I used way more lube than I thought I would need and really jammed my cock head into it as far as I could, and slowly rolled through the patterns.

I didn’t like it at first because I was comparing it to the Pulse, which isn’t fair. The Cobra Libre II is to Pulse what an engraver is to a jack hammer, by which I mean this:

The CL 2 is just a softer, more delicate mechanism. The Pulse oscillates and pounds away at your frenulum, the Cobra Libre 2 brumbles (a mediocre mix of buzzing and rumbling) your frenulum and your whole cock head.

If you do choose to purchase a Cobra Libre 2, just know that it may not be as intense as you expect.

All things considered, I think the Cobra Libre 2 is worth a look if you’ve got the money and want a damn fine looking product. It’ll cost you $129.99 and you can grab it in Red and Black or Black on Black… It’s like a sports car for your cock! So, if your cock is having a midlife crisis and you need to buy a sports car but can’t afford that Porsche or new Corvette Z71 (drool…..), get the best male masturbator. Have orgasms. Be happy, be healthy. Liberate the snake, good folks. (I hope someone gets that, if not I’m done.)
<<< Cobra Libre Review
Doc Johnson Jenna's Perfect Pair Review >>>