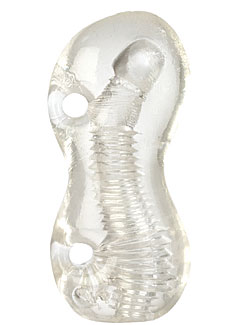 First off, the technicalities.

The Eden masturbator is shaped like a flattened kidney bean, roughly 5-1/4" long by 1-1/2" thick, with the widest “lobe” of the side measuring 2-1/2". It's made of solid TPR or, in layman's terms, latex-free synthetic rubber. More often than not, clear TPR sleeves= sticky with a plastic smell, but not this one. Neither of us could detect any odor at all, and while TPR is naturally a bit grabby this toy isn't sticky and doesn't pull hairs. Nice. The material stretches a fair bit, but the thickness of the Eden makes it firmer than most other masturbators in our arsenal overall. This probably lends a great deal to its durability, but when combined with the facts that this is a closed-ended masturbator and has an opening no bigger than a Sharpie pen, it also presents a problem.

The problem is, this is one tough toy to penetrate. Now I know it's marketed as being “tight,” but when getting your dick in it takes 3 hands and several minutes, that's not good. My girlfriend literally had to try to pull the toy open a bit and smash it down on me while I held my dick upright, and even then it took a lot of sliding around before I actually made it in there. And that was just to get the head in. My gf was giggling the whole time, which didn't help matters much.

Once the tighter-than-virginal opening was breached, the inner chamber of the sleeve stretched easily, but it was still tighter than what was comfortable and it took even more work for us to shove it down my dick. And then we lost it. I was about 2" away from the end of the tunnel when my gf lost her grip, the toy shot off of my dick like it was spring loaded, and landed across the room. Being that we've never had a toy make such a drastic attempt at escape, we both cracked up laughing.

After a quick rinse, I examined the sleeve and theorized that we were getting too much back pressure from the closed-ended design and needed to squeeze the air out before trying to put it back on. So now using the sleeve had turned into a 4-handed endeavor: I used one hand to squeeze the far end, the other to hold my dick upright, and both of my gfs to again work it onto me. That didn't make breaching the toy any easier, but we did manage to get it all the way down my dick this time and achieve a few pumps before it came off again. From what little time I spent in it, I can say that the inner rib texture is a might stiffer than I care for combined with the tightness. To be kind I'll describe it as a scrubbing sensation and leave it at that.

Now in this toy's defense, the material is better than average and it did stand up to a LOT of abuse without showing any signs of tearing. But the design isn't geared for an average-sized man to be able to get in and stay in. Men with a bit less downstairs may find it to be a great sleeve, but for everyone else… good luck in scoring with this one.

OMG this toy was crazy! Even before we used it I noticed that I could only fit 2 fingers in the sleeve with some effort, so I knew that using it on *him* was going to be a whole different story. Whenever I tried to push it on him it wanted to squish up so it was impossible to find any single good place to grab it. On the box it talked about the handles you could use to move it up and down, but I doubt if anyone in the manufacturing plant ever tried to do that. Those “handles” are just two holes on the top side of the toy that you can thread your fingers through, and unfortunately they're spaced far apart and both stretch too much to be of any use. Like my boyfriend says, it may work well if your partner is on the smaller side, but if not then be ready to chase it (and laugh) when it launches itself.