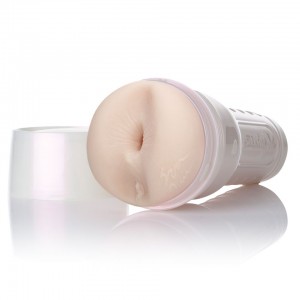 I now feel the need to revisit the Fleshlight FlightMD because Fleshlight has just released two new textures, a white case, and what I love most of all, a Semen Collector Cup.

What is a Semen Collector Cup and why does the new white Fleshlight FlightMD require one? A Semen Collector Cup is exactly what it sounds like, a device that attaches to the end of the Fleshlight FlightMD in order to collect ejaculate. Truthfully, I have no good ideas as to why one would want such a thing. It could certainly help with the cleanup after play, allowing you to simply dump the semen down the drain and wash out the Semen Collector Cup rather than having to scrub all that fluid from the nooks and crannies of the internal textured sleeve. Not that you wouldn’t still have to wash the sleeve. I can also think of some nefarious reasons why one might want to collect another’s semen. Not that I would, mind you, but I’ve read stories. Perhaps because I find semen a sticky, messy substance that eventually needs to be washed away, I don’t see all the wonderful applications for the collecting and keeping of it. I think the real problem is that I hear “Collector Cup” and I think of the things I used to get in Happy Meals as a kid, and it kinda grosses me out when the two come together in my mind.

Anyway, on to the new textures - Navigator and Instructor. The Instructor texture comes in the new white Fleshlight Flight case and is supposed to help improve endurance and stamina. I’m guessing this is because it looks a lot like the STU (Stamina Training Unit), a top selling Fleshlight and my favorite. The Navigator texture also comes in the white case and is the version that features the Semen Collector Cup. This newest Fleshlight product is actually called the Fleshlight FlightMD. Apparently, MD stands for “masturbation device”. I, for one, am quite relieved they finally spelled it because I’m sure people have been confusing Fleshlights as Red Bull coolers for years without that explanation.

As you can see, there is a significant difference between the original male masturbator texture and the two new textures, Instructor and Navigator. Fleshlight has come up three options for lovers of the Flight. I really like the white case and you know I want my own Fleshlight FlightMD to put on a shelf.