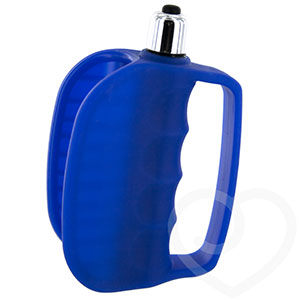 Shaped roughly like a short taco with a handle, the Hand Solo male masturbator is made entirely of silicone that's very soft and supple. It doesn't smell like anything and isn't sticky, though it will pick up dust pretty easy if you store it outside of a package. A thicker silicone center houses an extra long removable vibrating bullet and makes that part feel firm, so there's something to press against.

On the inside of the taco shape (where the “meat” goes) there's a series of bumps and ridges. Now I'll admit, when I first ran my fingers across those textures I thought they'd have a cheese grater effect on my dick due to how firm they were, but they don't. I can feel them very distinctly, but in a very good way with no irritation. It might not be so great if you were to use the toy dry, but I'm in the habit of smearing lubricant in any of my toys before use so all's well.

If you haven't already figured it out, using Hand Solo is easy. Put your fingers through the handle, grip your dick with the flexible “wings”, and do what comes natural. There's only about a 3.25″ width inside the hand strap, and it doesn't stretch much, so if you have really large hands you may find it easier to grip the toy with the handle smashed flat against your palm.

Hand Solo isn't meant to completely wrap around your shaft and, unless you're only sporting 4″, it won't cover the entire length either. It just contributes a bit of extra pleasure to the normal hand job. That said, I can't imagine any man being too large or small use the toy effectively. I find it best to position Hand Solo so the bump textures ride along the underside of my dick, which gives more sensations than the ridged wings do, but others might prefer it some other way.

Now as for the vibrating bullet, I can take it or leave it. It's a simple single-speed push button affair that takes an N-size battery and runs quietly enough not to be heard across the room. But the vibrations feel stronger on the palm than they do in the textures, and they aren't all that strong to me to begin with. It does add a bit of an extra sensation, but the toy's textures don't really need any help to feel good anyway. It spends more time on my girlfriends clit when we're playing with this toy than it does in Hand Solo.

Overall I think it's a great toy. Compared to a penis sleeve, it's apples and oranges; a completely different concept and an all-new feeling during use. It's not going to help you avoid a semen mess the way a sleeve can, but it's a whole lot easier to keep clean and quite a bit more discreet since most folks wouldn't have a clue as to what it was. Our roommate saw it and *still* thinks it's some sort of massage device for arthritis of the hands.

This vibrating male masturbator was a little awkward for me to get used to at first, but once I started thinking of it as a little mitt to grip him with it was easy squeezin. It's comfortable to hold and shortens the length of time it normally takes for him to get off with a hand job, which is easier on my wrist and arm muscles. It also wasn't as messy as I expected it to be. I thought that the open design would let the lube drip all over, but it's actually less messy than giving a lubed hand job without the toy.