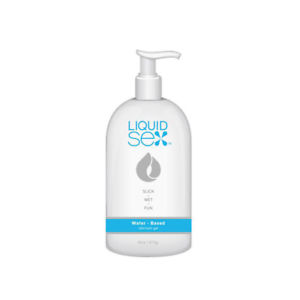 Sexual lubricants have always been popular for partnered intercourse, but did you know that they’re also suggested for use with sex toys? Lubes make toys so much easier to use by reducing any possible friction against the skin. However, if you use the wrong type of lubricant on the wrong toy, you might find your favorite sex toy becomes transformed into a mushy blob of goo. Or at least gets an ugly case of surface marring.

For the most part, all sex lubes can be broken down into three basic categories; water based, silicone based, and oil based. That makes it easier when determining if a lube is compatible with your sex toys or not.

These are the easiest lubes to clean off of male masturbators, and are also safe to use with condoms. Water-based lubes don’t last as long as other lubes though, and they are pretty much useless on toys during shower or bath play.

There can be some exceptions, but the general rule of thumb is Water-based lubes are safe to use with all sex toy materials.

The exceptions are some of the hybrid lubes on the market today, which are labeled as water based but actually contain some silicone too. Read the ingredients labels carefully, and look for words that end in “cone”. Such as; Dimethicone, Cyclomethicone, and Phenyl trimethicone, all of which are commonly used silicones. And though there are many kinds of silicones, Cyclopentasiloxane, Dimethiconol, Dimethylsiloxane, Polydimethylsiloxane are a few more that are commonly found in sex lubes. If any of these ingredients appear in your water-based lube, it’s best to err on the side of caution and treat them like silicone lubes when using them on sex toys.

If you’re in doubt about any of your lube’s ingredients, a quick Google search or a call to the manufacturer can help.

Because they’re not absorbed by the skin, silicone based lubes stay slick longer than most other lubes. They don’t get sticky, and they last a decent amount of time during water play. On the downside, silicone lubes can be a bugger to clean off of sex toys, and they can damage some sex toy materials.

Silicone based lubes are safe to use with many sex toy materials, but aren’t compatible at all with jelly or “skin” sex toys (like Cyberskin, SuperSkin, etc.). You also need to be very careful when trying a silicone lubricant with sex toys made of silicone, elastomer, or TPR, because silicone can ruin the surfaces depending on the exact make up of the material. Asking the toy’s manufacturer or testing a small spot near the base of the toy to see how it reacts before giving it a full coat is a good idea.

Keep in mind that some condoms are coated in silicone lubricant too, so it’s good to find out what kind of lube is on your favorite brand before sticking one on a sex toy of any of the materials we’ve mentioned.

Like silicone lubricants, oil based lubes stay slick for a good amount of time and last well during water play. Most do get absorbed by the skin after awhile, but are difficult to clean off of sex toys without ample amounts of soap and patience. They can be very harmful on some sex toys.

Oil-based lubes are also very controversial health-wise. In one camp you have people who claim that all oils are bad for vaginal health, but in the other you have people (even doctors) who highly recommend certain oils for lubrication. There’s even one oil based lube that contains natural oils called Élégance Woman’s Lubricant that is actually U.S. FDA approved for vaginal use. After years of using coconut oil ourselves, we believe that the truth lies somewhere in the middle, with certain natural oils being perfectly safe and most synthetic oils (like petroleum jelly) being a definite bad thing to put in your cooch. It’s up to you what you decide, but here’s what you need to know to protect your sex toys:

Oil based lubes that do NOT contain petroleum are safe for sex toys made of hard plastic, glass, metal, and medical grade silicone.

Oil based lubes can damage sex toys made of Elastomer, Intramed, Jelly, TPR, or latex. THIS INCLUDES LATEX CONDOMS!! Realistic “Skin” sex toys (such as Cyberskin, RealSkin, etc.) can be utterly disentigrated by oil based lubricants.

So what about the organic and “all natural” lubricants? Well, even though they’re made of natural ingredients, these lubes will still fall into one of two categories; water based or oil based. The difference is, any oil-based lubes that are truly “all natural” will get the oil content from things like cocounut, olive, shea, and jojoba. There’s not a lot of research available on compatibility between natural oils and sex toys, so for now it’s best to lump them in with other oils when considering sex toy lubrication.