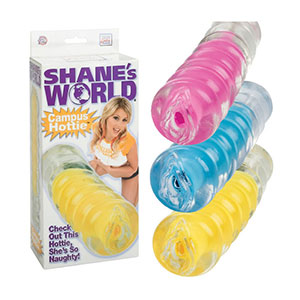 The Campus Hottie is a seamless one-piece male masturbator toy made of clear thermoplastic elastomer (TPE) sans any latex or phthalates. It's pliable like a firm jelly, and although almost all TPE toys feel a bit sticky this one is on the very low end of the stickiness spectrum so it's ok there. It does have a persistent plastic smell which remains on your hands until you wash them though.

The toy measures a little over 8" long with a 3/4" semi-realistic opening that stretches wide enough that it could accommodate a bigger than average prick. But now we start getting into why the Campus Hottie really didn't make the grade in my opinion.

I'm an average-sized guy when it comes to girth, yet once I got past the toy's opening the interior seemed to widen out enough to make it feel like the Campus Hottie had already taken on an entire football team. Or maybe it was the lack of any internal texturing whatsoever that made it feel so loose and unexciting.

The box said; “ribbed pleasure tunnel for an explosive finish” and the keyword there is “finish.” For more than 6" the inside of the toy has smooth walls, with the ribs only found in the last 1-1/2" or so of the toy. I've got enough length that I could have gotten into those ribs if it wasn't for the fact that the interior, at that point, narrows down to about a pencil's width and doesn't have a lot of side-to-side give. The result is, when I thrust the toy stretches and elongates so there's no way to get into that mini portion. In the interest of giving the toy a fair chance, we tried it 4 different times, and I never did manage to get off with it even with a good amount of squeezing to increase the pressure. If there had been any kind of variation into the tunnel at all - bumps, ribs, waves, whatever - the toy might have been good. But it was just too smooth and slick to even get any stimulating friction out of it.