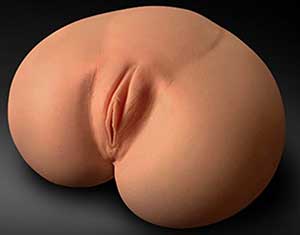 I have seen sex toys that look similar to the Soloflesh before but they have always been made out of solid silicone. While those toys look like quality products they tend to be rather expensive and I just can’t imagine storing something like that. What’s cool about the Soloflesh is that instead of being solid silicone it’s more like a big water balloon. When you’re not using it you can just drain the water out and it flattens out nicely for storage. Filling it with water also has the added benefit of keeping the toy warm as well as adding to the realistic feel and movement of the Soloflesh.

I’ve been sitting here trying to figure out a way to describe how the Soloflesh is designed and I am having a very hard time doing so. It’s one single piece of silicone that sort of folds in on itself. It’s a very clever design that works very well, but is hard to put into words. What I can tell you is that the Soloflesh is made of 100% Silicone Rubber, which is hypoallergenic, non-porous, and easily cleaned using soap and water. There are actually two pieces to the Soloflesh. There is the main silicone body and there is also a small Velcro strap that is used to seal the Soloflesh when it’s filled with water. At first I was a bit leery of the Velcro strap but it has done a very good job of keeping the water inside the Soloflesh where it belongs.

Okay, lets give this baby a try. Take your Soloflesh to the nearest sink, get the water nice and warm and start to fill it up. Once it’s full take the Velcro strap and cinch the opening closed. Your Soloflesh is now ready to be used. You will most likely want some lubricant. As the Soloflesh is made of silicone you will want to use a water-based lubricant because a silicone lubricant could break down the silicone of the Soloflesh destroying it. The first time I filled it with water I was in for an unpleasant surprise. When filled, the Soloflesh is heavy, very heavy. According to my bathroom scale, when filled with water the Soloflesh weighs 15 pounds!

This is where my problems with the Soloflesh begin. While it being a water filled device has the advantages of staying nice and warm and providing a realistic look and feel, it has some pretty big drawbacks as well. As I already mentioned, when filled with water the Soloflesh is quite heavy. Due to the weight, using this toy while lying on your back is quite difficult. It’s just so heavy that your arms get tired quickly. I’ve also tried just placing it on my tummy and thrusting into it but I didn’t have much luck there; your mileage may vary. Since using it while lying on your back isn’t ideal that means you’re going to have to be on top. However, there is a catch here as well. The Soloflesh isn’t designed to support your body weight, so you can’t lay on top of the thing and go to town. This pretty much just leaves doggy style. The good news is that doggy style works very well with this sex toy.

The water poses another problem for me as well, though this one is more of a mental issue. I am worried about the Soloflesh popping and spilling water everywhere. I think many men tend to masturbate in their bed, I know that I do, and the thought of spilling a gallon or more of water all over my bed isn’t a pleasant one. The makers of the Soloflesh even say that the device has a limited life. They state that laboratory tests yielded over 48 hours of continuous use which equates to 96 thirty minute sessions. That is admittedly quite a lot of uses but I sure wouldn’t want to be using the Soloflesh when/if there is a catastrophic failure. I think the worry of it popping distracts me while I am using it as well, my paranoia making it difficult to just relax and enjoy myself.

Unfortunately, I’m not done with my complaints. The creators of the Soloflesh state that it has “realistic tissue textures”. I have not found this to be the case. You may see a microscopic texture here, but you’ll be extremely hard pressed to feel it. In my experience the Soloflesh feels completely smooth in use. This seems like a missed opportunity to me. While the Soloflesh feels okay, it could be a lot better with a more aggressive texture. Another missed opportunity is that there is only one entrance on the Soloflesh, the vaginal entrance. It seems to me that if you’re going to design a toy that makes up the whole pelvis region of a woman you should also make the anal entry useable.

There are some positive aspects to the Soloflesh. Being able to fill it with warm water is a real blessing. This keeps the toy nice and warm, which really adds to one’s enjoyment. The Soloflesh is very good at retaining the heat as well; with the heat always lasting plenty of time for a full session. The Soloflesh also looks great while in use. Looking down and watching oneself sliding in and out of the Soloflesh vagina is very realistic and I must say, pretty hot. I also like the way that the butt jiggles when you are thrusting into it and it’s very spankable.

Care and cleaning of the Soloflesh is quite easy. Once you are done using it just bring it to the nearest sink and drain the water out. Then run some water through the inner canal and maybe some soap to flush out your fluids. Dry it off and store it. Another nice aspect is that when empty, the Soloflesh collapses down to a very manageable size and doesn’t really look at all like a sex toy. I am also happy to report that the Soloflesh isn’t much of a lint magnet at all.

So what’s my final verdict? Not so good.

The weight of the device and it not being able to support your own weight really limits how you can use it. Doggy style does work very well with the Soloflesh. That said, doggy style can get tiring, and with the Soloflesh you’re going to be the one doing all the work. I also find the level of stimulation a bit on the boring side. I think a more textured insert would go a very long way in improving this masturbator. I also think they should make the butt a usable orifice. The fear of breaking the Soloflesh also weighs heavy on my mind. There is a considerable amount of water inside of it and men tend to masturbate in places where you probably don’t want to spill a whole bunch of water! The Soloflesh isn’t without its merits though. The warmth, realistic movements and look really are very nice aspects to this toy. Looking down and watching myself thrust in and out, feeling the lifelike warmth of the toy, watching the butt jiggle as I thrust into it and seeing the lips gripping my shaft as I am pulling out really is a pretty awesome experience.