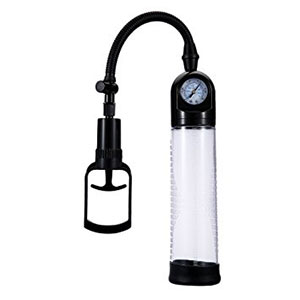 The Stamina Pump which is supposed to help a man “rise to new heights.” If you’ve never used one before, it’s true that a good penis pump will create enough suction to make a man’s shaft larger and harder, albeit temporarily, and also increase a man’s sensitivity. We’ve only played with one other penis masturbator pump before this, which we got in California Exotic’s Rock Hard Pump kit, and quite frankly I wasn’t as impressed with the Stamina Pump.

It comes in a very large clear plastic box that could be used for storage later as long as you don’t mind the pump being visible to anyone who might find it. The pump itself is comprised of a transparent blue plastic cylinder that measures roughly 8" long and 2-3/4" wide, with a foot-long length of tubing coming out of the top that ends with a silicone ball pump that has a quick release valve above it. The side of the cylinder has a scale marked in centimeters and inches so you can see how long your dick grows.

At the base is a removable silicone donut sleeve where you insert your penis. There aren’t any instructions included, but usage is simple: apply some water-based lube to your flaccid penis, place it at the entry hole, squeeze the bulb a time or two to suck it inside, and press the pump’s base against your groin. From there you pump a single time and wait a few seconds, repeating until you see and feel that you’re getting an erection.

That alone is enough to get you started and increase sensitivity, but if you want the big boner effect to last for more than a few seconds after you remove the pump, you’re going to need to pick up a cock ring to have on before you get started. The silicone base of the Stamina Pump is shaped to allow you to use it while wearing a ring, as long as there is no vibrating unit on it.

Now as far as doing what it’s built to do, the Stamina Pump is great. It doesn’t take more than a few squeezes of the bulb for it to work, and you don’t want to go overboard with that because the Stamina Pump creates a tight seal at the base and enough suction that I believe you could do some serious damage to your dick if you get stupid with it. If things do start feeling too intense, the quick release valve is easily triggered with your thumb and immediately releases the pressure.

Pulling the silicone base off lets you clean the inside of the cylinder easily with just a bit of soap and water, and you can fit a cloth in it to dry it well.

That’s all good, but there are a couple of things that I didn’t like about it as well. For one, the opening for insertion is 1-1/4" wide and the silicone is stiff enough that there’s not much extra give to it. It felt pleasantly tight to me in the beginning, but once my dick swelled to full glory it was difficult to get the thing off of me, even after I released the valve. For men who stay around 1-1/2" wide when their “enhanced” erections occur, this won’t be an issue. But if you get a little bigger than that the Stamina Pump has the potential to act like a Chinese finger trap on your prick. That makes me think that the extra size of the cylinder is going to be wasted space in many cases, since not too many men who reach 8" in length remain only a couple of finger-widths wide. If they had made that silicone a bit more flexible, it would have served a larger audience and made that roomy cylinder more useful.

So my final verdict is this: It’s a decent quality pump that should do very well for the average to less-than-average sized penis. It does its job with very little effort and the parts aren’t flimsy or cheap-feeling, so I’d wager it would last for quite some time. In truth it feels more durable than the other pump we have, which has already lasted for over a year now. However, larger men should avoid being lured by the size of the Stamina Pump.

This male masturbator pump does make his cock bigger and harder, but I’m not fond of it compared to our other one. Like my boyfriend said, the cylinder size is just overkill considering that somebody with a really big dick wouldn’t fit in it anyway, and it makes it a P.I.T.A. to store. The tubing doesn’t seem to be made to be removed, so when you take in consideration the portion of it that sticks up before it begins to bend over, along with the cylinder size, it’s about a 10″ long pump. Not easy to find a place for, and I’d feel better if we could at least run some water through the tubing once in awhile for cleanliness.