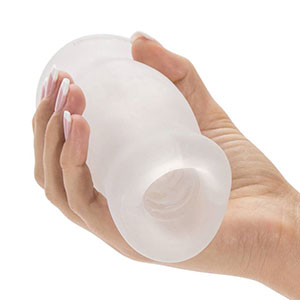 This new masturbation sleeve is called The Grip and it comes in a plastic cylinder that offers a permanent storage solution, which is a plus since the sleeve does attract lint like most silicone toys do. The sleeve is pretty benign looking at first glance. It actually reminds me of one of those foam ergonomic shovel handle grips that have just a bit of texture in the center to help you hold on to it (thus the name, eh?). It's got a 1" wide opening at each end, so there's no “wrong” way to use it, plus you can turn it inside out and use it that way if you want a different sensation. You can also squeeze it during use to make it feel tighter if you need to.

Inside the sleeve are smooth rounded ribs that begin about 1" in from either end and are spaced about an inch apart. I guess this would be a good time to say that the toy is only 6" long overall, so if you're well-endowed you're going to find yourself poking out of the end of this toy. That doesn't decrease the usability any though.

When you feel the thickness and density of this material it's nearly unbelievable that it would stretch like that, but she accomplished it with only a little lube and effort. And it didn't hurt the toy one darned bit.

Using the sleeve is just a bit different than with other sleeves. Or rather, *preparing* to use it is. You prep most masturbation sleeves by drizzling a little lubricant inside the toy, lubing up your dick, and having a go at it. For some sleeves you can get away with just one or the other. But The Grip is a toy that needs both, and “drizzling” doesn't get the job done. You need to use your fingers to “butter” the inside with lubricant, or else you'll miss spaces between the ribs and there'll be a bit more friction than most men would care for. The good part is, the silicone doesn't soak up the lube nor does it leak out of the toy if you do it how I've described, so you won't need to use much. Since you can only use a water-based lubricant with the silicone, you might have to re-apply a time or two during use, but you can get away with just adding some to your dick once the initial “toy buttering” is done.

It's very hard to describe how The Grip feels during use because it doesn't compare to any other sleeve we've used, nor to a real woman at all. It felt tighter than a lot of sleeves, with the ribs providing a lot of stimulation to the head of my prick in particular, but not to the point of being uncomfortable. The closest comparison I can make is that it's similar to getting a slippery hand job from a girl with thin fingers who's gripping the shit out of you in the process. In a very good way. The natural friction (bad word maybe, but I can't think of what else to use) also made the sleeve warm up quite a lot, which was also a nice sensation.

The only even vaguely negative thing I can say about this toy is that it's a bit louder than most other sleeves, which I suspect is from a combination of the firm material and the open design. Instead of the occasional quiet slurp, this toy produces a slurp-click kind of sound that takes a little getting used to. Particularly when your gf gets the giggles over it. It's not loud enough to be heard through the bedroom door though, just a bit distracting at first, and definitely not a deal-breaker.

All in all this is an excellent toy that I'm glad to be able to add to our arsenal, and I do hope Vixen Creations intends to expand this line in the future.

I'm absolutely thrilled to have another silicone sleeve for him now. We had one before (the Maven) but I screwed it up by using silicone lube in it and we never got around to replacing it. And we've found out that a TPE or TPR sleeve only lasts about a year on average before we have to throw it away. Fleshlights fare better than that, but ya know even those aren't going to last forever. The Grip is something that he not only enjoys but will last for years.

As for using the toy, from my end it's no effort. The firmness makes it really easy to use one-handed, which is good for when you're kissing and doing other things too, and the outer texture really does keep your hand from slipping around. The material feels a little sticky, which is something I've experienced with my own VixSkin toy, but I'm pretty sure that it's just something with the texture of the silicone itself since there's never any residue even when we set it on white sheets. It feels sort of like grabbing ahold of some of that Press ‘N Seal kitchen wrap that clings to everything like crazy. I don't mind it, but I didn't want someone else to buy the toy and confuse that grippy feeling with something bad happening to the material, because The Grip is one of the best male masturbators.