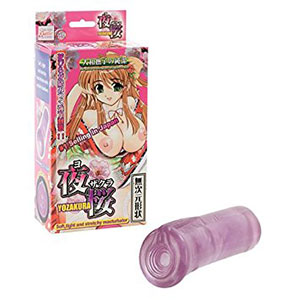 At first sight Yozakura's box naturally caught my eye with its anime drawing of the giant-boobed doll, but the pink flowery accents made the packaging seem more suited to a female's toy. That was until I did some research and found out that “Yozakura” loosely translates to “cherry blossoms at night.” Ok, I get it now. Female cherries… night time. Yeah.

The Yozakura male masturbator sleeve smells very strongly of rubber when you first unwrap it from its plastic bag, but after being washed and laid out for awhile the smell dissipates to a barely noticeable level. It's made entirely of TPR, which is a jelly-like form of synthetic rubber that contains no latex or phthalates. Like most TPR, the surface feels smooth but somewhat sticky until it gets lube on it - then it's super slippery.

At one end of the sleeve is a non-realistic cartoon version of a vulva. More precisely, it's a series of rings that have something that loosely resembles a clitoral hood at the top. The other end is closed.

The Yozakura measures 5-1/2" long by 1-3/4" wide, and has a 3/8" hole for insertion, but those measurements mean next to nothing if you're trying to figure out if it will fit you… it most likely will. The gf and I did some makeshift experiments to test this toy's limits so we could accurately say who it would work for. Bear with me, it gets a little weird here.

In order to test it for men both larger and smaller than myself, she started off with her finger, which is a little less than 3" long and 5/8" wide, and fingered my toy. She said it felt pretty good, and did provide some suction on it as well.

Next we used the Tantus Acute, which has a 5" insertable length, is 1-1/4" in diameter, and has a rather pronounced curve. The gf reasoned that men with curved penises might like to know if it would work out ok for them. It did; the toy conformed to its shape and thrusting was no additional effort.

We then used the Tantus O2 Revolution, which I call “The Blue Mammoth,” to abuse my toy. It's got a 7" insertable length and a whopping 1-3/4" diameter, so that's a pretty hefty piece. The Yozakura took it with no problem, though I think we had it *almost* maxed out width-wise.

While the Mammoth beats me in width, I personally have it beat in length (no, no pictures!), and never felt like I was stressing the toy. In hand, we stretched Yozakura to over 14" so I think it's pretty safe to say that anyone could use it unless they have a cock that needs its own zip code.

Alright, back to our regular program now…

Inside the male masturbator is a thin meandering path that has three bubble chambers with small nubs in them. It feels great, with enough suction and tightness to get the job done, but not so much as to be overwhelming.

The nubs aren't felt individually, but instead just feels like a mild change in texture that gives extra stimulation to the head of your cock in particular. Since the sleeve is so flexible, you can squeeze to alter the feeling overall too.

Though it wasn't an issue for me, I give you fair warning; Yozakura does make a fairly loud wet slurping noise no matter what you do, so if you're one of those guys who has to keep things very quiet, it's not happening with this toy.

When all fun is said and done, just turn the toy inside out and wash it well with soap and water, then lay it out to dry. If you decide not to keep its box, you may want to store it in a plastic bag because the one and only truly negative thing is that the TPR material is a bit of a lint magnet.

The Yozakura is one of the more comfortable sleeves I've used on him because it glides super easy and isn't weighty enough to tire out my arm. If you want to keep reading, there's a few things we discovered along the way that others might find useful though.

First off, you don't want to try using this toy without some lube. If you do, it's not only uncomfortable for him but the chambers will bunch up so it's nearly impossible to get anywhere. So grab some water-based lube and all will be well.

The second thing is, it'd better to apply the lube to his penis, not the toy. The inside texture isn't designed in a way that lets lube run very far down on its own, so not only is it a waste of lube but you hit a dry section partway in and wind up with that bunching effect again otherwise. A well-lubed dick fixes that issue. Additionally, if you get lube on your hand it makes the toy so slick that it's hard to grip it enough to actually move it up and down. So the rule for easy use is; wet dick, dry hand.

Last but not least, to get his dick inside the toy I had to hold it down near the opening to keep it from sliding around and doing nothing, but then had to move my grip upwards a bit after he was partway in before going further.

Otherwise the end would bend to the side and I couldn't get him all the way in it.

Once we figured out that trick though, it was easy pleasing.