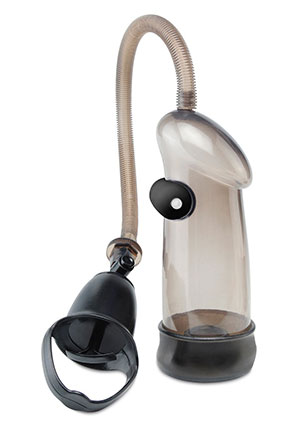 Size doesn't matter. We have all heard it but how many men actually believe it? I do. That doesn't mean I don't wish I was bigger though. I have never pulled any punches when it comes to the size of my penis. I'm not one of the most gifted guys. My girlfriend sure doesn't complain but if I could add an inch or so, I'm sure she wouldn't complain about that either.

We have wanted to try a penis pump for a while now. I have heard a lot of opinions on both end of the spectrum. Some people swear by them, others contest that they are worthless.

Most male masturbator pumps are a basic cylindrical shape. Not so with the Sure-Grip. This vacuum tube is shaped like a cock. A huge cock. A cock that could probably kill my girlfriend.

The base of the tube has a donut shaped flexible pvc piece with a small opening used to keep the tube airtight. This piece is removable to aid in cleaning the unit.

A short flexible tube attaches to the top of the vacuum tube. On the other end of the tube is the pump. To be honest, I don't know what this type of pump is called.

I looked quite a bit and all I could find were bulb pumps and trigger pumps. This doesn't seem to fit either category. Looking at the pictures, it works exactly as it would appear to. Holding it in your hand, you would put one finger on either side of the “trigger” and place your thumb on the u shaped piece on the outer edge.

Squeeze the trigger with your fingers. Placed just above the pump is a pressure release valve.

On the underside of the tube is an indent that holds an included bullet vibe. Other accessories include a small tube of lube, toy cleaner, and erection cream. Last but not least, a flexible star shaped cock ring.

We tried the pump out the night we got it. I was hoping to start out flaccid, but the excitement wasn't allowing that to happen. I needed to use quite a bit of lube to get into the opening. Once the pump was firmly in place, the gf attempted to pump me up.

I have heard some guys compare pumping your cock to a blow job. Either we weren't doing it right or those guys have never had a blow job. The sensation was not really pleasurable. In fact, it didn't feel like much of anything. We pumped for several minutes and it did look like my cock was growing a bit. I had suspicions that it was due to the distortion from the plastic I was looking through so we decided to take it out. Releasing the pressure was pretty cool. Lasted a fraction of a second but was the most sensation I had. When I pulled out, we found that my suspicions had been correct. I wasn't any bigger.

Sometimes your body just doesn't cooperate. I wasn't ready to give up on this pump yet. With the gfs permission, I gave it a whirl on my own. I tried out some of the erection cream that was provided. No effect. I put the pump on and pumped for a couple of minutes. Thinking I wasn't getting a seal, I tried applying a bit of pressure at the base. No difference. I tried pulling it off about half way to see if it would have any effect that way. Nope.

That was strike three.

In my experience, the Pump Worx Vibrating Sure-Grip Pump didn't have any effect on me at all. Aside from when I utilized the bullet vibe, there wasn't really much pleasure involved. I don't think my expectations were unrealistic. I just wanted to see it do something, anything at all. It didn't.

I'm not going to give up. I wouldn't mind trying a different pump. Perhaps I'll check out a different style. Not all toys work for all people.

Even though it didn't work, it was definitely interesting to try out!

My intentions were not completely innocent in wanting to try out a pump. I was really curious as to the ability to stimulate him enough to not only increase the size of his penis, but to torture him a little too. I had visions of forcing him to become hard after he was tender from ejaculating and totally not in the mood. Unfortunately that didn't happen. The trigger of the pump itself made my hand cramp up, and it didn't really seem to cause any reaction from him one way or the other. The only good part of it was the vibrating bullet, which I popped out of the pump and used to get myself off after our session.