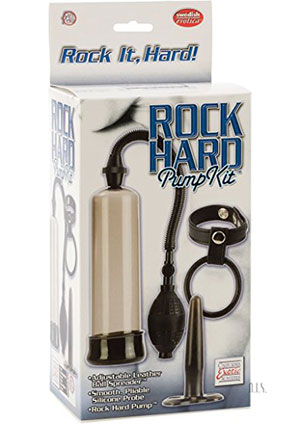 I know guys who laugh at the sight of penis pumps, thinking that they’re for men who have “a problem.” I had a brief run with ED back in my 30s, so I can vouch for the fact that pumps do work well as an alternative to the little blue pill, but now that those days are gone I’m still inclined to use one from time to time. Why? Because they tend to have a Six Million Dollar Man effect on your prick; growing it bigger, stronger, faster.

Like most affordable penis pumps, this one has a very simple design; a plastic cylinder with a soft PVC base (which is removable for washing), a flexible hose, a squeeze bulb, and a quick release valve. The base is really flexible and has a 1" hole to insert your penis, which most guys will probably find impossible to do while they’re soft. The trick is, put a little lube on and position the tip of your dick at the opening, then squeeze the bulb and let the pump suck it inside. Mission accomplished. Then you just keep squeezing the bulb to build up enough vacuum to start getting you hard.

For me this pump was comfortable to use, sealed well around the base, and started doing its job almost immediately. It’s capable of creating a lot of vacuum without ever leaking anywhere, so don’t go crazy with it. Only pump it enough to feel a firm tugging and tightness, but hit the release button if anything starts to hurt so you don’t damage your goods. The button is easy to push and immediately eliminates all pressure so you can withdraw.

Theoretically if you use a male masturbator pump for 15-30 mins a day it’s supposed to permanently increase your size over time, but I haven’t had this one long enough to comment on that. The short-term effect was excellent though.

I have no idea why this is called a “spreader” because it actually does the opposite. The stretchy O-ring slips over your dick and the adjustable leather strap goes around your balls, pulling everything together in a neat package. It’s designed to help you maintain the erection you achieve with the penis pump, but since the ring is 1-1/2" in unstretched diameter it’s not going to provide enough restriction to do that for smaller guys. You can use it as is, or remove the leather part and just use the ring by itself.

I tried wearing the ring (both alone and with the leather strap) while using the penis pump, but the ring prevented the pump from sealing right either way. On its own though, the ball spreader worked fine and my girlfriend got a thrill out of the Road Warrior dick look.

It’s smooth and pliable, small enough in diameter that it didn’t take a lot of prep to insert and was fine for gentle thrusting. There are also a couple of finger holes in the base to make it easier to hold onto, but they were too small for mine to fit through.

One caveat here though; the probe in my kit had a circular silicone burr at the tip leftover from the casting process, which wasn’t pleasant at all. A little sanding with one of my gfs nail files fixed the problem, but it’s something you should be on the lookout for.

Well I can definitely say that this pump did what it was supposed to, because it resulted in a different kind of my bf if you know what I mean. It was also fun to be able to see it work through the cylinder sides, and yes the ball spreader is a turn-on for me.

One thing that my boyfriend forgot to mention is that there’s another way to use a penis pump, which this one would be ideal for. Apparently some guys enjoy using these solo and will pump them up, then release it, pump up, release, and so on until they orgasm. I can’t personally say how that feels, but the release valve on this pump is easy enough to use that I’m sure it would work well.