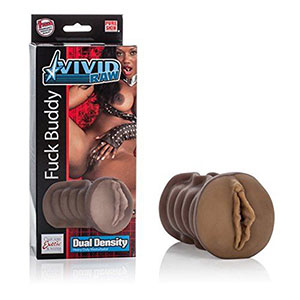 The packaging to the Vivid Raw line all have images of exposed women on them. I'm not sure who they are. Inside the toy is sealed in plastic.

The Vivd Raw Fuck Buddy is a heavy-duty male masturbator made of dual dentisy TPR. The TPR has the sweet smell of UR3. It feels very similar to UR3 as well. The material feel is very squishy at the insertable portion and the inside of the masturbator, but the outside handle is firmer. They have done this to give you a more stable grip during stroking. Please note: that TPR is porous but it is phthalate free and latex free.

The Fuck Buddy was given a realistic appearance with its beautiful vulva. Pulling the lips aside you expose the hole. The hole is really, really tight but it does stretch. It's tight on my finger which has a 2.5" circumference and it stretches 7" circumference. Inside is some of the most unusual texture. There are rippled rings with patches of nubs ridges. The length of the entire masturbator is 6" but it can only hand about 5" in length.

The first thing that turned him and I off about this masturbator was the smell. Neither of us have been a fan of the UR3 smell. The second thing that wasn't attractive was the feel of powder when you touched the material. It's like a residue that stays with you. These are all things that are typical of skin like materials. The final thing that was a turn off was how small the opening to the masturbator was.

Applying some water based lube inside the masturbator is highly indicated. I could feel the texture pulling and creating suction unlike some of the other masturbators I've tried. Be sure to keep reapplying lube because it will not stroke as smoothly. I like the dual density for the chamber. Gives you a good grip on the masturbator and stops the masturbator from being so floppy while you use it. I did enjoy the Fuck Buddy, but I felt that it was too tight. For an inexpensive masturbator - Fuck Buddy is a decent choice.